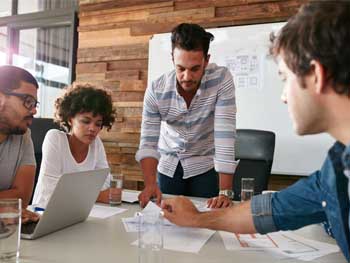 Birmingham City University has been recognised for its contribution to growth, regeneration and entrepreneurship in its home city by a new government-backed standard.

The University has been named as one of the top institutions in the country for its work with enterprise, contribution to skills, and support for local growth and regeneration in the newly launched Knowledge Exchange Framework (KEF), which charts how universities work in partnership with business and communities.

Published by UK Research and Innovation, the KEF has been created to examine how universities serve the economy and society for the benefit of the public, business and communities, as well as to support improved access to their knowledge and expertise.

The results of the inaugural KEF published today (March 31) showed Birmingham City University ranked among the country’s leading institutions in the categories of:

KEF places similar universities into groups based on factors like their size, specialisation and research profile, with Birmingham City University performing strongly in these categories not just in its group, but across the entire sector.

The results demonstrate the contribution the University is making to its city in supporting the development of much-needed skills for employment, supporting innovation with existing businesses and start-ups and providing expert research and advice for key businesses and sectors.

Key University initiatives that were used to demonstrate impact under the KEF included the STEAMhouse project, which brings together artists, academics and industry to collaborate on new ideas, skills, products and services to both underpin economic growth, and drive the innovation capacity of the region.

Since its launch in May 2018 STEAMhouse has supported more than 600 businesses, launched a new incubation centre for business collaboration, and is currently investing £70m in the regeneration of a historic Birmingham building to host a new innovation campus.

Birmingham City University’s mission to be the University for Birmingham and the region, reflects its ongoing role as a civic university, with community at the core of its ambition and which draws large numbers of its students from the city and wider region. This place-based outlook is demonstrated through:

Professor Julian Beer, Deputy Vice-Chancellor at Birmingham City University, said: “Universities have a responsibility to serve the communities they are in, and as a university that prides itself on the contribution we make to our city, it is extremely pleasing to see this ethos reflected in the Knowledge Exchange Framework.

We know that the vast majority of our students not only come from the West Midlands but also stay here after graduation, so training our future workforce and supporting the existing and developing businesses of our region is at the heart of all that we do.
Professor Julian Beer

“Having been a part of this city for over 175 years we recognise just how important it is to see it thrive. And that is why we remain as committed as ever developing the skills packages, and promoting the innovation that will boost employment, create new businesses and grow our existing industries.

“We will continue to work hard in partnership with business, community and civic leaders, and play our part in the city for years to come. The opening of our new STEAMhouse facility in the rejuvenated Belmont Works later this year will give us a platform to go even further with this.”