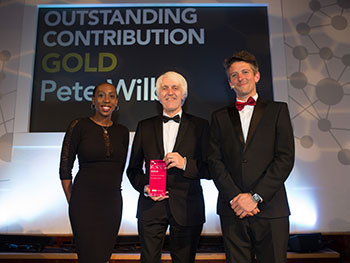 A Birmingham City University lecturer has been recognised for his outstanding contribution to the public relations industry by the Chartered Institute of Public Relations (CIPR).

Pete Wilby, who recently retired from his role at the University’s School of Media, received his award at the Midlands PRide Awards on Friday 30 September at the region’s annual celebration of exceptional public relations practice.

More than 250 public relations professionals attended the event, with other winners on the night including Willoughby Public Relations and Birmingham Children's Hospital Charity for their work on ‘Birmingham’s Big Hoot 2015’.

On receiving his award, Pete said: “This is a great honour and lovely post-retirement surprise. It was a pleasure to watch students develop as professional PR people and I enjoyed an excellent relationship with the CIPR when working at Birmingham City University.

I'm proud of the success of many of my students who were able to benefit from the professional body's support of their studies.

The University’s School of Media recently celebrated setting a record for students winning the CIPR Midlands Student of the Year award for ten consecutive years.

Former student Thomas O’Connell, who scooped the accolade in 2015, said: “What sets the University’s Media and Communication degree course apart from the others is the confidence staff have in their students - the opportunity to devise and implement my own campaign with a real client is something that has truly impressed employers.”

On Pete’s contribution to the University which consisted of 14 years lecturing at the University’s School of Media, Philip Young, PR course leader said: “Pete was very highly regarded by students and colleagues alike. I have known Pete for many years, and he was one the reasons I came to the University.

“He was an inspirational tutor and played a big part in helping many students to forge great careers in PR and the media. Pete is a hard act to follow, but we will continue his important work in fostering important industry relationships, and emphasising the link between university and practice."