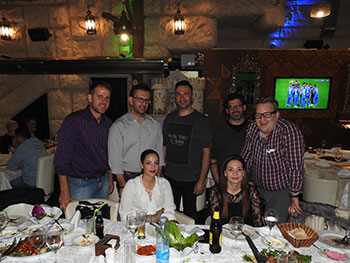 Dr Angelos Iacovides is the Managing Director of Scenario Creative Services Ltd and is also a presenter and producer on Klik FM. He studied Media and Communication at Birmingham City University, graduating in 2000, and said:

“I had a great time at Birmingham City University and learnt a lot. I certainly miss it very much and look back on my time fondly.

“However, it has been brilliant reconnecting with old friends and making new ones from Birmingham City University here in Cyprus, sharing our experiences both as students and what we have gone on to achieve.”

Held at Sawa in Nicosia on Sunday 19 November, the event also gave alumni from the UK institution the opportunity to hear about the highlights of the University’s year and its plans for the future.

“More than anything, our alumni represent what our University is all about – transforming students’ lives so that they can go out and achieve successful careers. It has been incredibly inspiring meeting with our alumni here in Cyprus to hear how they are all making their mark in our fast-changing, increasingly global economy.”

“Internationalisation is vitally important to us at Birmingham City University and we have set ourselves ambitious international goals for the next few years. We believe that a truly modern university must look beyond traditional boundaries of practice or geography, and this is exemplified through the transformation of our students from Cyprus in particular.”

Richard Bedenham from Limassol is the CEO and Founder of MyRatesMagic, a rate calculation tool for the hospitality industry. He studied Computer Networks for Business at Birmingham City University, graduating in 2005, and said:

As part of the University’s visit to Cyprus, Ben Goodwin also spent time meeting prospective students at the ASPIRE Private British School in Paphos and several locations within Nicosia, including the Pascal School and the annual UK Education Exhibition at the Hilton Cyprus.

“It has been really inspiring meeting with the next generation of university students here in Cyprus and the desire to study in the UK appears to be as popular as ever. The weak pound certainly makes the UK a more attractive place to study, live and work, and, despite Brexit, loans for prospective undergraduate and postgraduate students across the European Union have been guaranteed up to those who commence their studies with us in the 2018 to 2019 academic year.

“With our experienced faculty, students at Birmingham City University gain global insights to better compete in today’s job market. However, as well as a world class education, our students are based in the heart of the UK’s second city, in the middle of the country – making it the perfect place to explore the rest of Great Britain and Western Europe from.”