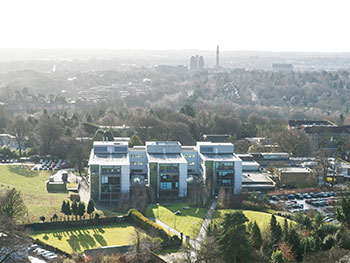 Birmingham City University is investing £20m in new facilities that promise a major contribution to the health and wellbeing of the West Midlands.

Training more professionals skilled in personal and public health is becoming increasingly important in a region rated the second most obese in England.

Public Health England figures last year revealed that the West Midlands trailed only the North East for obesity levels, with 65.7 per cent of people classed as overweight, prompting calls for better diets, improved education and measures to encourage more exercise.

The expansion of the University’s campus in Edgbaston will feature specialist laboratories for a newly created School of Life Sciences, offering a range of courses in health, nutrition and biomedicine.

The 10,000m² building will reinforce Birmingham City University's status as the region’s largest provider of qualified health and social care professionals to the NHS and will also provide a new home to its School of Education, supporting the development of the next generation of school teachers.

Professor Ian Blair, Executive Dean of the Faculty of Health, Education and Life Sciences, said: “This investment clearly demonstrates the University’s commitment to the things that matter to our society and our economy, giving us the facilities we need to develop the next generation of specialists able to improve the region’s health and education.

“Birmingham City University is already the largest provider of health professionals in the region and the producer of more teachers than any other institution in the West Midlands. This move cements our place in supporting our crucial public services and also develops our capacity to play a role in improving nutrition and tackling modern epidemics such as obesity and Type 2 Diabetes."

Building work at the campus will commence in early 2016, with the new facilities set to open to students in September 2017.

Sheppard Robson has been appointed as architect for the new build, with White Young Green the structural engineer. Couch Perry Wilkes will be the mechanical and service engineer, and Sweet Group will be cost consultant on the project.