UK needs to get over its punishment addiction, says HM probation chief 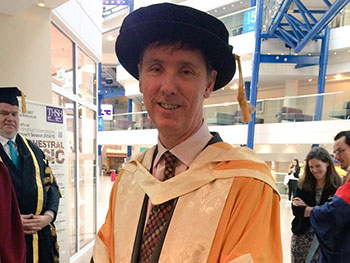 "It's time the UK got over its morbid addiction with punishment and started working better with offenders," claimed HM Chief Inspector of Probation Paul McDowell this week in Birmingham.

The probation chief was presented with an Honorary Doctorate degree from Birmingham City University on Monday 26 January, where he spoke of the major issues facing the running of today's prisons and rubbished new guidance issued this week by Justice Secretary Chris Grayling into tackling illegal drug crime inside prison.

"The key challenge at the moment is addressing the staff to prisoner ratio," said Paul.

"If it were up to me I'd have fewer people in prison and more people on community penalties. We should free up more time and resource inside prisons to really work with individuals to get them ready for their lives back in communities."

Paul argues we need a 'reality check' on the current approach that prisons are taking to crack down on drug use. "Unless we start to deal with drugs in an entirely different way culturally and if we continue to criminalise individuals with drug addictions, we're never going to solve the problem.

"Chris Grayling's zero tolerance approach is too narrow a view and all it will do is exacerbate the already existing problems.

Paul became HM Chief Inspector of Probation in February 2014 and has worked in the criminal justice sector for a quarter of a century.

Prior to his current role, Paul spent five years as Chief Executive Officer at crime reduction charity Nacro and has also worked as a Prison Governor at HM Prison Coldingley and HM Prison Brixton, where he halved assault rates and had considerable success in challenging cultural attitudes related to issues of diversity.

Paul has a Masters in Criminology from the University of Cambridge and a Diploma in Criminal Justice from Birmingham City University.