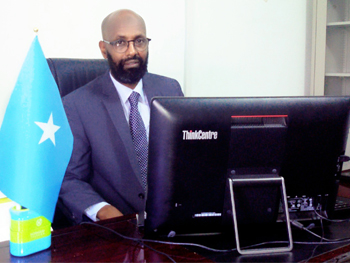 A graduate from Birmingham City University has been appointed to the role of Director General of the Ministry of Humanitarian Affairs and Disaster Management in Somalia.

Born in the central town of El-Bur, Ismail Olow was raised in Somalia’s capital city, Mogadishu, before moving to the UK to study both his undergraduate and postgraduate degrees in Birmingham, Ismail returned to his homeland in 2014 when he began lecturing in Project Management in the Centre for Postgraduate Studies at SIMAD University, (formerly known as the Somali Institute of Management and Administration Development).

Following two decades of civil war, Somalia is making strong progress towards stability and its fledgling economy is being bolstered by substantial unexploited natural resources that have the potential to place it among the top 20 countries holding oil.

“I had two reasons to return for my country; firstly, I wanted to actively participate in my homeland’s recovery and rebuilding, and the second reason was to care for my sick and elderly mother, which I am continuing to do.

Keen to transfer my knowledge and share experiences to help my country get back on its feet, I became involved in lots of public speaking and engagement opportunities, forging networks among academic colleagues, business leaders, government officials and members of the public. Coupled with the skills I acquired studying at Birmingham City University, these interactions prepared me for the challenges I now face in my new government role.”

The Ministry of Humanitarian Affairs and Disaster Management (MHA&DM) is the principal institution at federal level in Somalia with the mandate to manage and coordinate all humanitarian affairs, as well as all aspects of disaster mitigation. The Ministry also works to protect Somali lives and property, and to build capacities among the most vulnerable in its society, such as children, women, the elderly, those with special needs and minority groups.

Ismail came to the UK with English as his fourth language, after Somali, Arabic and Dutch, and bolstered his academic writing and grammar knowledge through the University’s Centre for Academic Success.

Rob Cade, Teaching Fellow, Centre for Academic Success said that Ismail was a very engaged student at Birmingham City University and was destined to be a high achiever in the workplace:

“I was delighted to hear from Ismail about his appointment as Director General of the Ministry of Humanitarian Affairs and Disaster Management in Somalia.

As a member of the Centre for Academic Success team, I worked with him throughout his time at Birmingham City University and I was always impressed by his desire to use what he learnt in practical situations. For example, we wrote a database application together, which is currently used by a major Birmingham-based Somali Charity.

It is the Centre for Academic Success team’s ability to offer one-to-one support to students that makes my work so rewarding, and contributes to Birmingham City University’s reputation for excellent student support.”

Alongside his position at MHA&DM, Ismail continues to lecture part time at SIMAD University in Mogadishu, and is keen to forge new links between the institution and his alma mater.

“There is nothing more valuable than the experience and the education that I gained from Birmingham City University in terms of my current job at MHA&DM. The education I received in Birmingham has exceptionally prepared me with the necessary tools to succeed in real life situations, developing my skills in critical thinking, teamwork, communication and complex problem solving, for example, as well as showing me how to map my own future.

Meanwhile, the theory taught on my courses was complemented by the exceptional services offered by the University’s Centre for Academic Success, and with their support I fine-tuned my practical skills in areas such as academic writing, time management and prioritisation.”