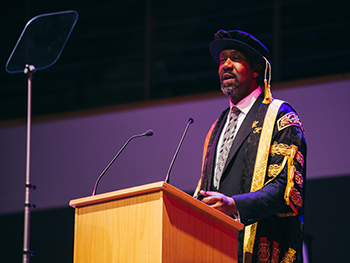 Birmingham City University is delighted to announce that Sir Lenny Henry has been installed as the institution’s new Chancellor.

The actor, writer, comedian and charitable campaigner was installed during an official ceremony held at Birmingham Town Hall on Tuesday 22 November.

In his inaugural address as Chancellor, Sir Lenny Henry emphasised that “education is a right, not an accident of birth” and highlighted what he hopes to achieve with his role at Birmingham City University over the next five years.

“I grew up with the belief that education was not intended for the likes of me. It wasn’t until I was doing a summer season with Cannon and Ball in 1981 that I was brave enough to embark on my GCSEs. It was tough going, but I got through it.

“I was 46 before I got my first degree with the Open University and, while a comparative latecomer to higher education – whose career hardly relied on securing a BA or an MA after my name – that experience changed my life. It opened my mind to more possibilities, new thinking and different perspectives.

Being Chancellor of Birmingham City University is a chance for me to give back, to contribute something to the generation of young people leaving school now and to those people coming back in to education – mature students – who, like me, missed out on the chance when they were younger. The installation follows several visits to the campus earlier in the year when the Dudley-born star saw for himself how the University opens doors to the creative arts for young people from a range of backgrounds.

Sir Lenny Henry said that “exporting the ideas of diversity, equality and creativity is a concept very close to my heart”:

This institution understands that education is a right, not an accident of birth, and if you’re smart enough, creative enough and hardworking enough, Birmingham City University can provide you with life-changing opportunities, whatever your background.

“Birmingham City University is strongly placed to make a massive contribution to the world through their commitment to diversity, inclusion and the creative arts.”

Over 300 invited guests were present at Sir Lenny’s installation ceremony, which saw him wearing ceremonial robes as he formally accepted the position of Chancellor.

The evening featured bespoke performances by staff and students from the University, including jazz tutor Percy Pursglove – who composed a fanfare – and composition teacher Errollyn Wallen and postgraduate student Chris Cresswell, who debuted ‘Lenny’s Song’.

Furthermore, a specially-commissioned short film titled ‘Transformation’ featuring Sir Lenny was screened for the first time during the ceremony that marks the beginning of his five year term as Chancellor.