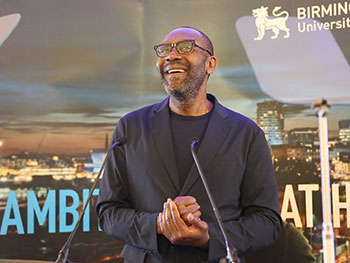 Chancellor of Birmingham City University, Sir Lenny Henry, has launched a new networking group for the institution in London.

‘BCU in London’ is open to graduates of the University – from senior leaders and up and coming professionals – who are based or have business-interests in the capital.

Find out more about the Alumni Association

Sir Lenny Henry addressed some 100 distinguished guests and alumni gathered at the launch, and said:

“We want this launch to form the basis of a strong and enduring network – BCU in London – where graduates and friends of the University here can come together to forge professional links that recognise what you have in common and the expertise you have in your various disciplines.

Both online and in person, the aim of BCU in London is to bring our alumni together in a formidable network of professionals whose careers have been impacted by our University.

Senior alumni representatives from organisations such as the BBC, EY, IBM, Sport England and Universal Music Group were also present at the event held on the evening of Wednesday 5 July.

“Birmingham City University has transformed the Eastside region of the city; its new Conservatoire, about to open in September on the City Centre Campus – the first in a generation for the UK; and its City South campus in Edgbaston, with fantastic new sports and health science facilities, is also set to open before the end of the year.

“Add to that the wider changes that have literally transformed the city over the past decade and its small wonder we want to shout about it.

“In fact, one of the reasons we wanted to hold this University event here in the capital is to show London that despite what’s happening in the West Midlands at the moment we don’t necessarily think the world revolves around Birmingham – some cool  things come out of London too!”

Take a look at Lenny's speech: