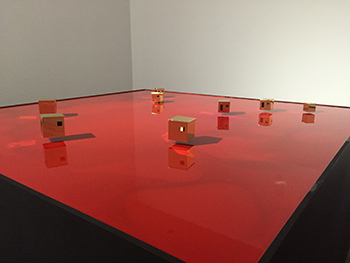 A wide range of work is being shown, including paintings, drawings, prints, photographs, sculptures and video, with many pieces previously exhibited in the gallery, some re-made especially for the exhibition, and others completely new.

From Roger Fry’s seminal Post-Impressionist exhibition in 1911, to showcases of the next generation of artists like the recent ‘Bloomberg New Contemporaries’, Bluecoat has developed a reputation as an important venue for new art in England’s north west. 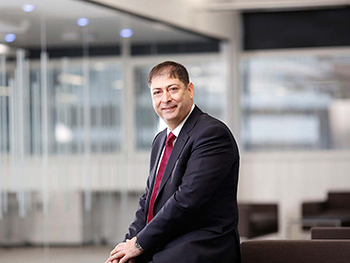 Professor Bashir Makhoul has worked in higher education for 20 years, while still maintaining his work as an internationally recognised practicing artist.

His artwork often features his signature cardboard houses seemingly floating in air, representing unsettlement and the continuous displacement of people across borders and nations. They ultimately reference his homeland of Palestine, with the boxes depicting refugee houses and all those who have been disenfranchised by conflict.

Professor Makhoul has exhibited his art at the 2013 Venice Biennale, Hermitage St Petersburg and at the Aichi Biennale in Japan. He exhibited at Bluecoat early in his career in 1993 with ‘Al-Hijara’, an installation of paintings and wallpaper, and Professor Mahhoul said he is delighted to be back:

It is wonderful to be sharing an exhibition with such esteemed artists for a historic occasion that marks all that Bluecoats has achieved, but also highlights its continued commitment to the arts.

“Like Birmingham, Liverpool is a magnet for art and culture from all around the world, and I never fail to be inspired when I visit.”

Bluecoat’s anniversary programme sees 300 days of celebration, from 4 February until 30 November in 2017, comprising exhibitions, performances of music, dance and live art, literature events, commissions, a sociologist in residence, and a major heritage participation project, 'My Bluecoat'.

As the UK’s oldest arts centre, Bluecoat has been at the heart of Liverpool’s cultural life for many years. We have always strived to be at the forefront of developments in contemporary art in the UK, whether that is through showcasing the work of under-represented artists, exhibiting the work of major artists in Liverpool for the first time, or through our ground-breaking participation programmes which aim to bring art to the widest possible audience. 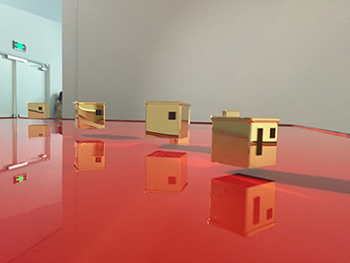 “We are delighted to be celebrating Bluecoat’s 300th anniversary in 2017, and look forward to an exciting year that showcases our achievements while also looking to our future.”

The Bluecoat building, a fine example of Queen Anne style architecture, began life as a charity school in 1717, before housing an arts community in 1907 and formally becoming an arts centre in 1927, making it the oldest of its kind in the UK.