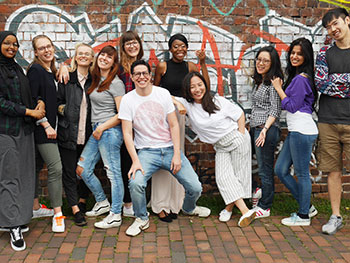 Digital marketing postgraduate students from Birmingham City University have launched a new online campaign to showcase themselves as leaders of the next generation of advertisers and marketers.

The campaign has launched as the 14 students, from the Future Media Master’s programme at Birmingham City University, are getting set to make their mark in 2017 within the digital marketing and advertising arena.

In order to help them stand out from the crowd, they have devised an online showcase, which highlights the talents of the group as a collective and then narrows in on the skillsets and aptitudes of each individual. The campaign is being positioned as a one-stop-shop for industry, as employers seek to recruit the very best graduate talent.

“As we entered the final stages of our programme, we wanted to help launch our careers in a way that no other students are doing and so decided on a collaborative and collective approach. We know industry is wanting to snap up the best graduates and we are making this so much easier by offering a host of desirable skills and personalities in one place.

Be sure to head over to our website to have a peek at what we are all up to. You may just find the extra dash of colour your clients are looking for!

The students have already worked with several notable UK agencies as part of their studies, including Found, Hunterlodge Advertising, MediaCom, Red Bee and Think Jam.

“The Future Media class of 2017 impressed us from the moment they arrived at Found HQ. Watch this space, these guys are going places.”

The fusion of specialists in this year’s cohort has resulted in a rich seam of talent as diverse as the group itself, and includes:

“Over the past year, our students have developed great digital prowess and agility, proving they are undoubtedly the answer to the industry’s cry for truly digitally savvy talent.

“Their commitment to deploying a live campaign before they complete their course captures the essence of what it means to think outside of the box and to creatively launch themselves into the career landscape.”