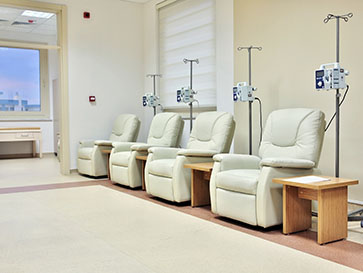 Two Birmingham City University academics are calling for changes in the way chemotherapy is delivered to reduce risks to healthcare workers, after research revealed many practitioners had suffered fertility problems, hair loss or nausea linked to the treatment.

A new website has been launched by two of the University’s nursing lecturers as part of a campaign to highlight the “potential dangers” healthcare workers face when delivering chemotherapy to patients.

The Cytotoxic Systemic Anti-Cancer Therapy, or SACT Safety Campaign is the brainchild of Alison Simons and Samantha Toland; both award-winning Senior Lecturers in Nursing.

The academics believe that closed system drug transfer devices (CSDTDs), which prevent the escape of hazardous drug or vapour concentrations, should be mandatory to protect healthcare workers from harm before, during and after administering chemotherapy drugs.

The inspiration for the campaign followed results from research that the duo carried out. Originally published in the British Journal of Nursing, ‘Perceived effects from handling systemic anti-cancer therapy agents’ (2017) found that almost half of nurses who responded to the research survey had experienced issues like headaches, dizziness or nausea, or a combination of two or more symptoms.

The duo argue that implementing the proposed procedures minimises serious risks and is worth the cost and time implications involved.

Healthcare practitioners in this country work non-stop around the clock to provide treatment to chemotherapy patients.

“We passionately believe that all hospitals and healthcare providers should be using drug transfer devices that minimise the risk of harm to nurses.

The lecturers argue that their proposed system prevents contaminants from being transferred when therapy sessions take place which reduces the risk of nurses being exposed to potentially dangerous chemicals.

“There is now plenty of evidence to support the fact that nurses can face dangers when administering treatment processes for patients undergoing chemotherapy.

“Changing clinical practices and introducing new equipment to prevent these risks may take time and add to costs but when you think about what is at risk the benefits outweigh the problems.”

The academics are working with providers to deliver university accredited chemotherapy courses to make nurses and their employers aware of the risks and follow recommended guidelines.

The SACT campaign has been set up in partnership with Vygon UK, a company that produces medical equipment for Chemotherapy treatment.