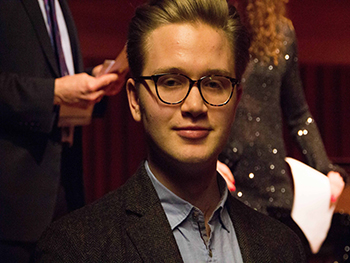 A recent graduate from Birmingham Conservatoire is celebrating being named the winner of a national music competition.

Jazz pianist Jacky Naylor, who gained a first class honours degree from Birmingham Conservatoire, part of Birmingham City University, has been awarded the Dankworth Prize for Jazz Composition in the big band category for his work ‘Bilbao’.

The Dankworth Prize for Jazz Composition, established by businessman Art Mead in 2007, is run by the Musicians’ Company and sponsored by the Wavendon Foundation. The competition offers two prizes for original jazz compositions, with £1,000 being awarded to both the best composition for big band and small ensemble. i and Emily Dankworth, daughter and granddaughter of the late jazz composer, Sir John Dankworth. The winners’
compositions were played at a concert in Milton Court by members of the Guildhall Big Band, directed by Scott Stroman.

Jeremy Price has been Head of Jazz at Birmingham Conservatoire since the Jazz Department was established in 1999. He said:

Composition and arranging for big band is really strong here at Birmingham Conservatoire under the directorship of Hans Koller. All jazz students are composers, with opportunity to trial their work in our Composers’ Jazz Orchestra, so it’s all kept very live and integral with our improvising scene. I think this is why we have produced so many good writers in jazz, including Jacky Naylor.

“Other notable alumni writers are Dave Ferris, Sean Gibbs, Alcyona Mick and Ed Puddick. We also support our own composition and arranging prize and the students get access to high level masterclasses from people like Mike Gibbs, Maria Schneider and Stan Sulzmann.”

Skipton-born Jacky Naylor has recently released his debut big band album ‘Rough Boundaries’, which features Birmingham Jazz Orchestra. It comprises of five compositions in which he captures the essence of his visits to five contrasting cities, Bilbao, Marrakech, Moscow, Reykjavik and Stockholm.

Aside from his passion for big band, the Birmingham-based musician also leads his own trio featuring Percy Pursglove (bass) and Nathan England-Jones (drums), which showcases his original music.

“Jacky is without doubt one of the most gifted composers and arrangers of his generation. He has a wonderful way of combining tradition with innovation, intuition with intellect, and groove with lyricism.”