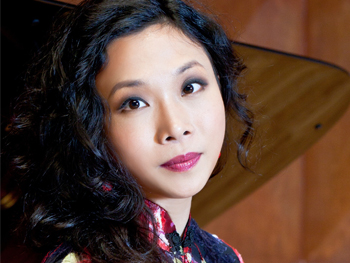 Di Xiao (肖荻), a classical piano soloist from China, has been named one of Birmingham City University’s Alumni of the Year. She will receive her award on Tuesday 9 January in Symphony Hall, Birmingham, in the presence of hundreds of graduands and their families.

Despite her global success, Di came from very humble beginnings in her native city of Guangzhou. Growing up in a poor yet musical family, Di’s father sold his motorbike – the family’s only transport – in order to buy her a piano when she was just two years old. In order to find a good teacher, her dad had to pedal for an hour each way across the city with her on the back of his bicycle, to get to her piano lessons.

Honing her talent at the junior Conservatoire in Guangzhou, Di went on to study at the Odessa Conservatoire, Ukraine and the Central Conservatory of Music in Beijing, graduating from the latter with one of the highest marks in its history.

Di Xiao then got the chance to study at Birmingham City University’s Royal Birmingham Conservatoire for where she developed personally and professionally on an Advanced Postgraduate Diploma, and had the chance to build her experience with the opportunity to perform at such prestigious venues as Birmingham’s world-famous Symphony Hall.

“I remember that the student volunteer picked me up from the airport and everybody I met was so friendly and helpful. It did make a huge difference for someone who had just travelled half-way around the globe and spoke in a completely different language, as I had very little English then. I remember I marvelled at the facilities and the pianos I got to practise on. Until then I never knew that you could find so many different colours and textures on one instrument.”

On completing her studies at Birmingham City University, Di was selected as the UK’s European Concert Halls Organisation (ECHO) Raising Star for the 2008/09 season, which led to further recitals in prestigious venues in the UK, the Netherlands, Germany, Spain and Austria. She has released four albums and been featured on TV and radio in the UK and China – and the Birmingham Post have described her as “a pianist of awesome gifts”.

On finding out that she had been selected for the award, Di Xiao said:

“I feel very honoured indeed to be chosen as Alumni of the Year. I also feel very lucky and grateful for everything that the University has done for me and the opportunities it has exposed me to.

I arrived as a student over a decade ago and now, as an Honorary Member of the Royal Birmingham Conservatoire, I am part of this big family and I will endeavour to share its positive spirit with as many people and students as I can because I know that, apart from the amazing facilities that we now have, it's always the people that make a place special. I shall never take this responsibility lightly.
Di Xiao

Now based in the UK, Di continues to play for audiences across the world, performing regularly outside the UK in Europe and Asia. She aims to become an international ambassador for the piano, combining both Chinese and Western repertoire in the programming of concerts and creating a bridge between the two cultures.

Di remains involved with Birmingham City University as a Piano Tutor at the Royal Birmingham Conservatoire, helping to nurture the next generation of pianists.