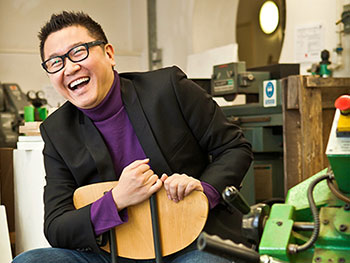 An internationally acclaimed jewellery designer and Birmingham City University graduate is to celebrate a sparkling 10 years of working in the industry this week at a special event raising funds for Birmingham Children’s Hospital.

The ‘Bespoke Jewellery’ event at the University’s School of Jewellery will see Birmingham based designer Fei Liu launch a new product range before local retailers and businesses.

Three pieces of jewellery will be auctioned at the event on Friday 9 October, with the money raised being donated to Birmingham Children’s Hospital.

After graduating from Birmingham City University, Liu went on to establish Fei Liu Fine Jewellery in 2006 and has since received worldwide recognition receiving prestigious industry awards including Harper Bazaar’s China Jewellery Designer of the Year and the International Jewellery London Editor’s Choice Award.

Liu quickly gained a celebrity following after designing a plaque for footballer David Beckham and House actress Lisa Edelstein being photographed wearing one of Liu’s rings at the Emmy Awards.

“It’s also a very special time for the School as we celebrate our 125th year. Fei Liu is a great role model for our students, after developing his own luxury brand and going on to set up his own stores in the city’s Jewellery Quarter and in Beijing.”

Fusing eastern heritage and western design, Liu’s work is an expression of femininity and glamour.

Liu is one of six Jewellery Quarter designers whose products are stocked in the new £35 million John Lewis Birmingham store which opened in September.