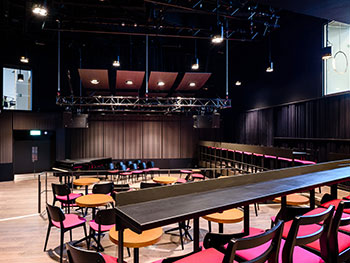 Birmingham’s brand new, state-of-the-art Eastside Jazz Club, will open its doors for the first time on Thursday 5 October, enhancing the city’s cultural offer and being of international significance to the wider jazz scene.

From its outset the new venue will begin hosting jazz in all its forms, from standards to contemporary and solo spots to big band, featuring young talent from the immediate jazz community to world-renowned musicians.

The very first public gig in the new 80-seat Eastside Jazz Club also marks the start of a Guest Artists series: long-time collaborators and great friends, saxophonist David Liebman and composer and pianist Richie Beirach, both stalwarts and innovators on the New York scene for many years, play on Thursday 5 October.

“This is a really significant moment for us as we see all our plans come to fruition. We aim to make this venue central to the burgeoning Birmingham jazz scene and a fixture on the international touring circuit for world-renowned artists. We are all really excited to get off the mark officially with such important luminaries for our music as Dave Liebman and Richie Beirach.

This venue has so much potential and I’m delighted that our architects and acoustic engineers have responded to our requests in such an imaginative and helpful way. It's a beautiful space in which to play and listen and is also a great social space for musicians and audiences alike. Jazz music deserves the unique club environment that allows it to thrive and develop and we have it right here.

Internationally-acclaimed guests are already lined up for the first few months. On Thursday 2 November, there is a chance to hear the partnership of Canadian sisters Christine and Ingrid Jensen (saxes and trumpet respectively) with guitarist Ben Monder, known for their organic composing style and infinite variety. Meanwhile, exciting new guitarist and former winner of the Montreux jazz guitar competition, Gilad Hekselman is joined by the lyrical saxophonist Mark Turner on Thursday 16 November.

Trumpeter and Yamaha Artist Rex Richardson joins the Jeremy Price Quartet on Thursday 9 November, and one of Britain’s most important jazz musicians and a regular Birmingham visitor, saxophonist Stan Sulzmann plays with the Eastside Jazz Club Trio on Thursday 30 November.

Eastside Jazz Club will host events most evenings with days of the week dedicated to different strands of jazz repertoire: Monday is Big Band Night with the Jazz Orchestra and Ellington Orchestra alternating weekly; Tuesday is Jazz Canon night featuring the music of the masters such as Wayne Shorter, Herbie Hancock and Ornette Coleman. Wednesdays give the floor to contemporary and original jazz with celebrity guest nights taking a regular Thursday slot.

Fridays will see anything from the Afro-Cuban Band to folk, gypsy and swing, kicking off on 13 October with singer-songwriter and keys man Oli Rockberger. Saturdays are given over to the local community and young musicians’ groups.

Eastside Jazz Club opens on Thursday 5 October. For further information and details of how to book, visit www.bcu.ac.uk/concerts