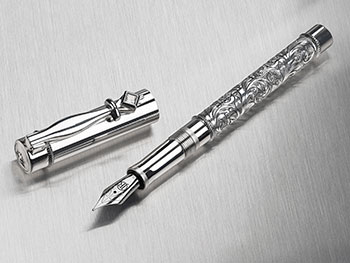 Graduates from Birmingham City University’s School of Jewellery have teamed up to showcase a new product at London Craft Week in May.

Watchmakers Craig and Rebecca Struthers, also known as Struthers London, have collaborated with pen maker Jack Row to create an object designed to push the boundaries of interdisciplinary crafts practice.

The new pen product features a princess-cut diamond set and a barrel engraved with traditional acanthus leaf scrolling, as was popular in eighteenth century English watchmaking.

Commenting on their new collaboration, the Struthers said: “We have always been proud to work with some of the finest master craftsmen in Britain.

Collaborating with others who share our passion for making to create truly unique objects executed to the highest standard inspires us.

Husband and wife Craig and Rebecca Struthers studied Horology at Birmingham City University's School of Jewellery and were recently honoured as two of the University's Alumni of the Year.

The project also saw the graduates working with leather designer Mia Sabel, who created a hand-crafted leather pouch for the pen.

Jack Row, who graduated from the University's School of Jewellery in 2009, said: "I've admired the Struthers' and Mia's work for some time and jumped at the opportunity to collaborate with them on this special project. I'm very proud of the end result, which is a perfect harmony of our complimentary aesthetic and craft principles."

Running from 3 to 7 May, London Craft Week showcases exceptional craftsmanship from around the world with a programme of over 130 events across the city.