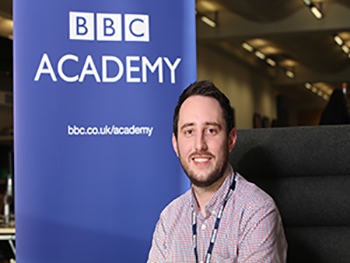 A Birmingham City University graduate has won a top television tech award for his research into artificial intelligence for TV programmes, underlining the rise in broadcast talent from the UK Midlands.

Lawrence Card, who recently completed his second year of the University’s broadcast engineering trainee scheme delivered in partnership with the BBC, has been awarded the prestigious Royal Television Society Technologist of the Year Award.

He graduated last month with a distinction in MSc Broadcast Engineering.

As part of his studies, Lawrence investigated how production teams who require live video monitoring can benefit from artificial intelligence and machine learning for object detection, classification and scene understanding of video, which impressed a panel of industry expert judges.

Speaking about the award, Card said: “When I first joined the BBC a few years ago, I saw a colleague win the award, which inspired me to want to apply myself one day.”

“I had to demonstrate achievements in my career so far and gain the endorsement of a sponsor in the first stage, before being quizzed by a panel of industry experts who delved deeper into my experience so far.”

“I’ve begun a new role as a software engineer in data solutions with the BBC where I will help build software to support news and crunch data to continually improve the BBC’s news output.”

“I’m really excited to receive the award in November. It’s actually just a few days before my birthday so great timing!”

Being recognised in this way helps me show myself off and gives me assurance that I am going in the right direction. In terms of the future, I'm always open to being dynamic and moving with the times. Following my project as part of the University course, I'm interested to explore using artificial intelligence to improve broadcast workflows - Lawrence Card

Lawrence Card joins a number of Birmingham City University and BBC apprentices and trainees to win the award in recent years, and complements the recent news that 2016 graduate Jade Jenkins recently worked on camerawork for Season 12 of Doctor Who following selection success in the Screen Skills film trainee initiative.

Alongside her were two graduates from 2018 – Luke Brickley who is now a trainee in the BBC Production Sound department, and Liam Morgan whose impressive CV of paid freelance work also won him a trainee position in the BBC Camera department.

The scheme runs for 12 months, during which time trainees undertake paid work on a range of high-end feature productions as well as receiving help and advice from an industry mentor.

The other sector of the scheme places Birmingham City University trainees within high-end TV productions across the UK; 2017 graduate Serena Patel recently secured a place and began working in the Production department at Wall To Wall; a leading producer of award-winning drama, factual and entertainment content.

Simon Handley, Associate Dean for Academic Portfolio and Market Development at Birmingham City University's Faculty of Computing, Engineering and the Built Environment, said, "We currently offer postgraduate and undergraduate apprenticeship schemes for the broadcasting which incorporate and embrace the constant change and innovative technology that we know drives the industry."

This initiative was developed in partnership with and for the BBC - since 2013 we have been at the heart of education in this area with over 140 BBC Broadcast engineers and technologists. Ongoing discussions are taking place with other broadcasting organisations who are seeking to benefit from CEBE’s education and apprenticeship offering - Simon Handley, Associate Dean

More information about the University’s School of Computing and Digital Technology can be found online here.