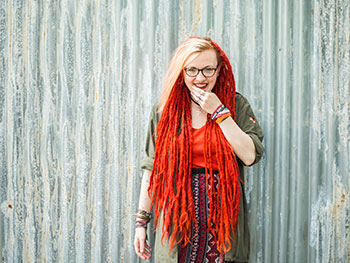 A graduate from Birmingham City University’s School of Media is to launch her debut poetry collection in London next week, focusing on political and social subjects including depression, LGBTQ issues and sexual aggravation.

Sophie Sparham is a 24 year-old spoken word artist who hails from Derby and is set to launch her poetic works at Zigfrid von Underbelly in Shoreditch on Saturday 2 December.

Poems featured in Sophie’s ‘Mind the Gap’ collection, include ‘Should I?’, which highlights the pressures of handling unwanted sexual attention. A section from the poem reads:

Just so you’ll leave me alone

I shouldn’t have to take down your number

Just so I know you won’t phone

I shouldn’t have to say she’s my girlfriend

To try and put you off your prey

I shouldn’t think your behaviour is acceptable

Just because you’re trying to get laid”

“Now the mothers do the mixing

While the builders stand outside school

The kids, they won’t speak to me

Because the kids they are cruel

But I’ll try and change opinions

Because sometimes the revolution is quiet

Sometimes the revolution is small”

Ahead of the launch event, Sophie said: “I'm excited and nervous for the launch. I’m also so grateful that Benjamin Zephaniah took the time to produce the foreword to my book, he influenced me as a kid, so it's so great to have him involved.

As a dyslexic teen, I never thought I'd get this far with literacy and I’m excited to see where the journey will take me.

Birmingham-born Zephaniah has previously been named as one of Britain’s greatest post-war writers.

In his foreword, he says: “I learned about Sophie when a writer friend sent me a link to one of her YouTube videos. I was very impressed with this fearless, compelling performer, who is unafraid to seek out the truth and comment on issues that others might shy away from.

“As a performer, she is captivating. She commands the room, capturing her audience’s attention and delivering devastating insights into contemporary issues and her own personal experiences.

“I am delighted to introduce Sophie Sparham to the wider world through this debut collection. She has a unique and distinctive voice, and has some very important things to say.”

Find out more information about the ‘Mind the Gap’ launch event and book tickets.