Award winning jeweller to be honoured at university awards ceremony 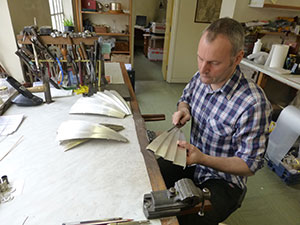 Kevin Grey completed his Jewellery and Silversmithing BTEC HND course in 2009 and has since excelled in the area of innovative silversmithing, combining traditional metalworking skills with new technology to construct award-winning bespoke silver pieces.

His work, having been recognised by The Goldsmiths’ Company among others, is rapidly becoming a collector's item and his latest award will be a Birmingham City University Alumni of the Year accolade, in the Enterprise and Innovation category.

Kevin’s early career saw him producing hand-made parts for luxury motor vehicles, working for Rolls-Royce, Bentley and Morgan Motor Company, over a 25-year period. After feeling he had gone as far as he could in that sector, Kevin made the decision to use his metalworking skills for more artistic purposes, and enrolled on a course at the School of Jewellery; part of Birmingham City University. After graduation, Kevin took up a Residency at the School, sharing his skills and knowledge with other students.

Last year he received the Goldsmiths’ Company Award – a prestigious prize recognising work that achieves the highest standards of craftsmanship, design and originality – for the third time, among various other awards. He now sells his bespoke pieces direct to members of the public through his website and via a gallery in New York, where many of his buyers are based, and has ambitions for further international expansion in the future.

On receiving the Birmingham City University Alumni of the Year award, Kevin said: “I thought it was great to be named as an alumni of the year – I was very honoured as it’s not a title many people receive each year and it’s always nice to be recognised.”

Kevin will be receiving his award at the University’s graduation ceremony taking place on Thursday 15 January at the Symphony Hall in Birmingham.