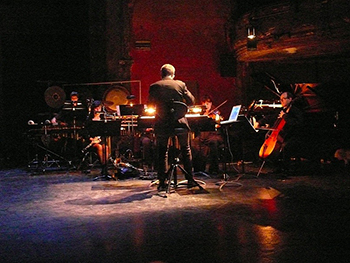 L’ensemble Court-circuit were founded by Philippe Hurel and Pierre Andre-Valade over twenty years ago.

Not shy of experimentation, they regard themselves as an art project promoting intense risk-taking, an agitator in the international contemporary scene.

Bedrossian, Harvey, Swithinbank and Bertrand are four composers that have in common a special love for manipulating sound. Bedrossian achieves this through timbral saturation in search of a “raw” type of perception, whilst in Bertrand it is polyphonic overabundance that gives sound its quality: shifting planes, phasing and micro-intervals are the tools he uses to lead our listening away from polyphonic lines and towards timbre itself. On the other hand Jonathan Harvey, because of his relationship with spectral music and true to his contemplative nature, writes music close to that of Tristan Murail. it is refined and often ethereal music, encouraging us to empty our minds. And finally the music of young Swithinbank can best be described as a kind of sonic minimalism, poetic and evocative at the same time.

This concert promises to be a real highlight of this year’s festival. With financial help from Diaphonique, the Franco-British fund for
contemporary music supported by the Institut Français, SACEM (French Society of Authors, Composers and Publishers of Music), British Council, bureauexport for French music and the French Ministry of Culture and Media.

Court-circuit is supported by the Regional Directorate for Cultural Affairs of the Île-de-France – Ministry of Culture and Media, as part of CERNI (Companies and Ensembles with National and International Influence). The activities of the ensemble are funded by the Île-de-France region as part of its support for artistic and cultural heritage.

Court-circuit is also in receipt of financial support from SACEM, SPEDIDAM (Society for the Collection and Distribution of Royalties for Performing Artists) and “Musique Nouvelle en Liberté”

Sponsored by the following companies: