Light up the Night - An evening with Mike Stevens

Light Up the Night – An evening with Mike Stevens

The talk will start promptly at 8.30pm. Latecomers will not be admitted after this time. 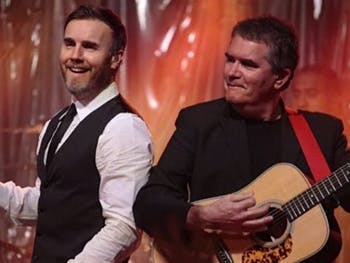 Musical Director and musician for Take That and ELO, Mike Stevens will return to his alma mater – Birmingham Conservatoire.

Since graduating from the then Birmingham School of Music in 1979, Mike has enjoyed a successful career in the music industry, including a solo career as a saxophonist.

He is best known as Take That’s musical director, who he has worked and toured with from 1992, playing keyboards, guitar and saxophone, as well as backing vocals. Mike was literally ‘Back For Good’ in 2006, when the group asked him back as musical director following their reunion.

1979 ...was the year Mike graduated from Birmingham School of Music

Mike’s work with Take That made him an in-demand musical director and subsequently led him to direct with artists such as Will Young, Sugababes, Eurythmics, Mika, Geri Halliwell as well as being a touring member of 10cc.

He has directed many big charity events such as BBC 'Children in Need Rocks' 2009-2013 where he directed the house band, as well as Nelson Mandela's' 46664 Concerts in South Africa.

He is also a Grammy nominated producer, known particularly for his work with Annie Lennox over the past decade.

In 2012 Mike was hired as musical director for the 'Diamond Jubilee' Concert at Buckingham Palace, and two years later directed Jeff Lynne's ELO at BBC Radio 2's Hyde Park Festival. This led to him becoming Musical Director of the newly re-formed 'Jeff Lynne's ELO' which has included performances at 'The Grammys' and 'Hollywood Bowl'.

Mike will be interviewed by renowned cellist and Principal of the Birmingham Conservatoire, Professor Julian Lloyd Webber. Mike will share his experiences from his career in the music industry and reflect on his journey from music student, to touring with one of the UK’s biggest bands.

Following the talk Mike will be presented with an Honorary Fellowship from Birmingham City University.