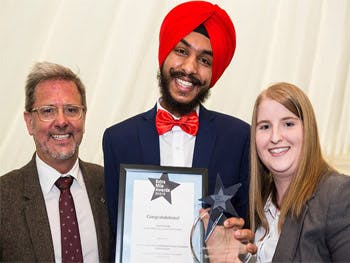 Do you know an excellent student or member of staff, who deserves to be recognised for their achievements? Nominations are now open for the Extra Mile Awards 2016/17.

Run in partnership by the University and the Students' Union, Extra Mile honours those staff and students who have made an exceptional contribution to our University community.

This year we have introduced a number of new categories, including Academic Student of the Year, and for the first time there will be two winners in the Behind the Scenes Staff of the Year category - one from a faculty and one from Professional Services.

The winners will be announced in an awards ceremony in a marquee in Eastside City Park in May 2017.

Just under 1,000 nominations were received for last year's awards from staff and students. So get thinking - which staff or students do you think deserve an award?